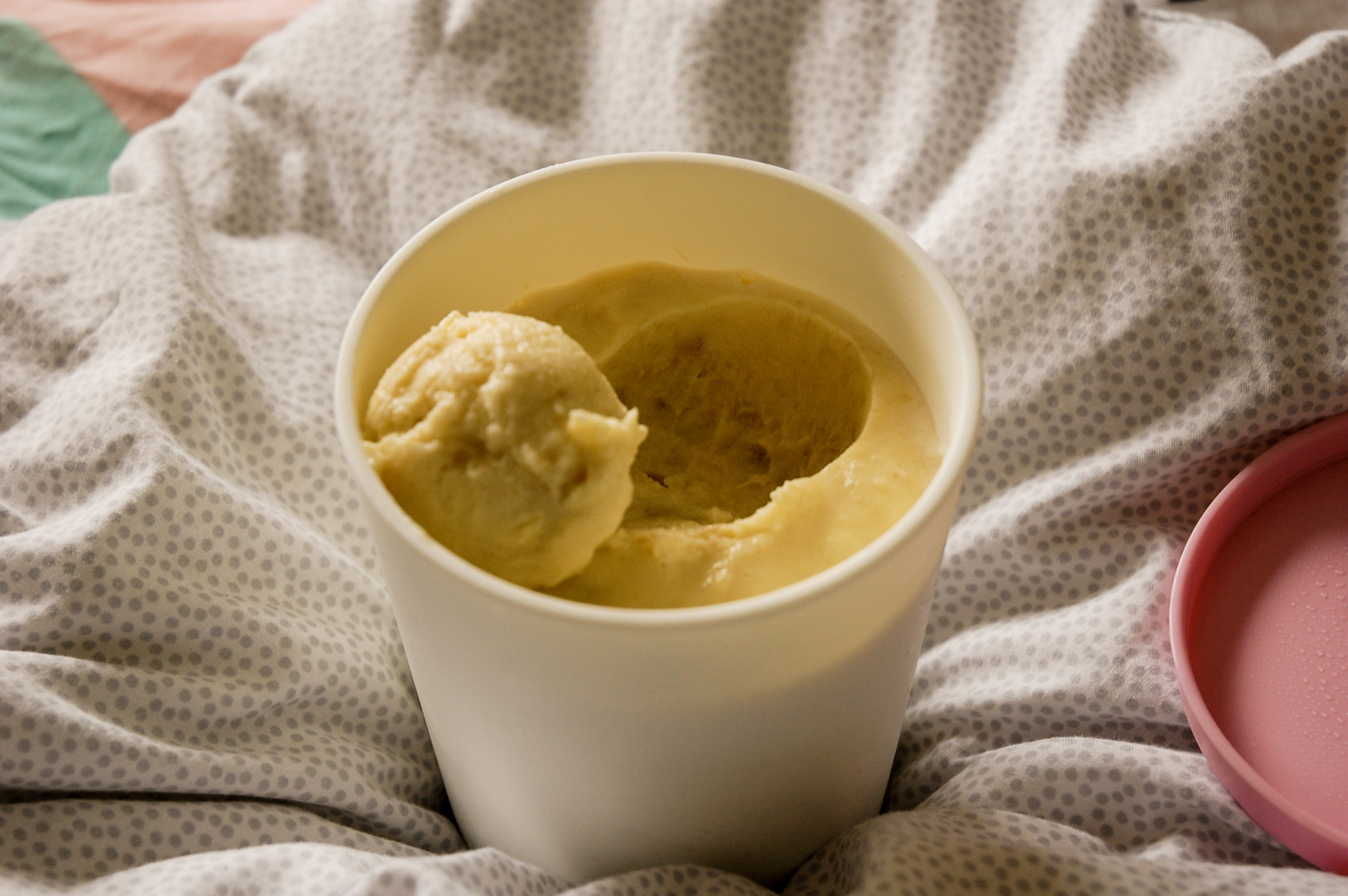 Not any ordinary banana ice cream. This roasted banana gelato has an added depth of flavour from the roasting of three ripe bananas, that you wouldn’t get from ordinary shop-bought ice cream. Imagine this served with caramel sauce? YUM!

Sooo, my thinking in this recipe is that Arubians LOVE roasted banana. They love it on the BBQ served with caramel sauce and omg I want to eat it right now! Since we’ve had some lovely weather recently (I don’t know what’s happened?!), banana ice cream seemed logical!

The below contains affiliate links

Once I’d planned to make ice cream, I knew I was going to need an ice cream tub to put it in. A few years ago when I made ice cream, I ended up putting it in Tupperware and it wasn’t great. I spotted this super cute pink-lidded Tovolo ice cream tub on Amazon and fell in love instantly. It holds a litre, which was the perfect size for the ice cream I was planning to make! The cool thing is that it comes in yellow, green and red too! It’s super durable, dishwasher safe and the silicone lid fits on tightly. For £12.95, its was a great find!

P.S I think the ice cream scoop came from Tiger. I couldn’t find it online but I’m sure it’s still available in the shops since it’s almost summer season.

Now before you get too excited abut making this ice cream, I’ll have to tell you now that I did use an ice cream machine. I don’t in any way think this is cheating as it’s all in the ice cream mix-making to be honest! Ice cream machines make your life SO much easier. You don’t have to worry about mixing it by hand and the churning on the machine aerates the ice cream mix, giving you the softest gelato! I’m going to talk about my fave ice-cream machine, that I’ve had since 2015, below.

Why I love my ice cream machine

So I’ve had my Cuisinart Gelato and Ice Cream Maker since 2015. After studying for a Patisserie diploma at Le Cordon Bleu London, where we did learn a tiny bit about making ice cream, I had a sudden interest in it! I decided to invest a bit of money into a proper machine, not because i’m lazy but I just wanted to be able to create ice cream to the same standard as an ice cream shop, and to be able to experiment without the risk of it going wrong. PLUS, the chefs used an ice cream machine during the course, so that’s what I had seen a demonstration on.

Here are a few reasons why investing in an ice-cream machine is worth it:

I know it’s a bit of an investment at £224.95 but if you were to purchase one, I’d highly recommend the Cuisinart Ice cream and Gelato Machine. It’s the machine I’m going to be using for any ice cream recipes you see on my blog. If you do purchase, I hope you love it as much as me! Actually, I know you will!

A delicious banana ice cream with the added flavour from the roasting of the bananas. A good dessert to whip up and serve with caramel sauce on a hot day.