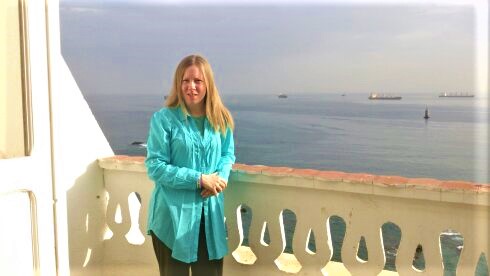 Travel tips from an experienced traveller to Algeria, aimed at Westerners. All you need to know plus places of interest.

Algeria is not the sort of country that’s on most people’s bucket lists. It isn’t a very tourist-oriented place, with most of its wealth coming from the export of oil, and the bordering lands of Tunisia and Morocco being more travel-friendly. Many people also think that it’s a dangerous country to visit. Yes, there has been some political unrest in the recent past (the 1990s being particularly tumultuous) as well as terrorist attacks, but unfortunately that type of thing is becoming more widespread all over the world – and the truth is that Algeria’s just as safe as anywhere else nowadays.

This is a collaborative post written by Nicola from Nic’s Healthy Life – A London based health, fitness & lifestyle blog. 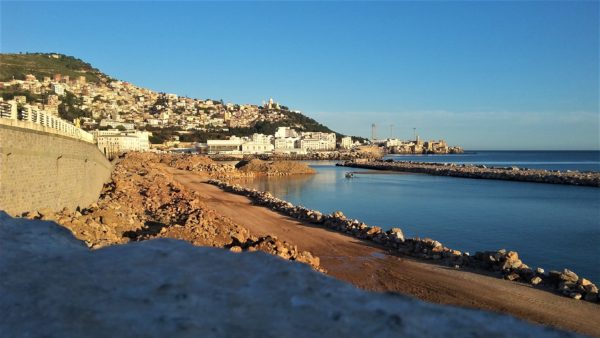 Being married to an Algerian, I’ve had the opportunity to visit the country and interact with the people on several occasions. My husband grew up in Algiers, Algeria’s capital city, and moved to the UK twelve years ago at the age of 21. Although he loves England and the British way of life, he’s still proud of his heritage and travels back home to see his family and friends at least twice a year. 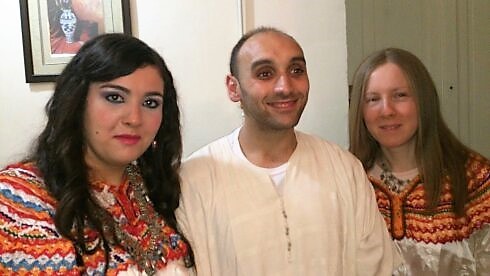 The first time I visited Algeria as a Brit, I was in for a bit of a culture shock. Every country I’ve been to is different and beautiful in its own way, but Algeria was so different to anything I’d experienced before. If you’re also a Westerner planning to visit the country then hopefully my experience will give you a bit of a heads-up of what to expect.

Firstly, there’s the language barrier. Although I’m good at European languages (I can get by in French, Spanish and German and know a tiny bit of Italian), I speak very little Arabic so needed my husband with me most of the time to translate. Fortunately though, most Algerians speak French as well (Algeria was ruled by France until it gained independence in 1962) so I was able to communicate with his family somewhat whenever I was alone with them. 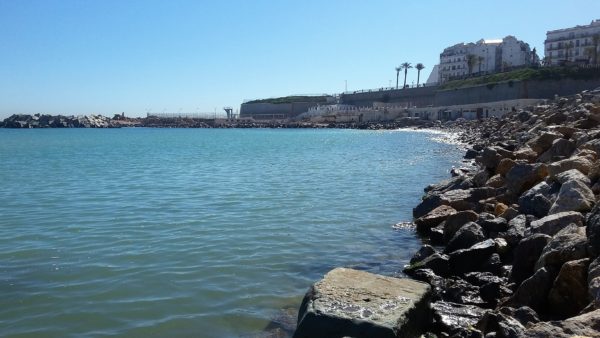 The culture and way of life are very different to Britain, too. Most Algerian families follow the traditional model of the man going to work while the woman stays at home and takes care of the children, housework and cooking. She takes great pride in being a good housewife, mother and hostess. Fresh food is prepared for every meal (more on the food later), cakes and traditional sweets are always on offer and the house is generally spotless. Women tend to socialise in each other’s homes while the men meet up in coffee shops for an espresso or mint tea. 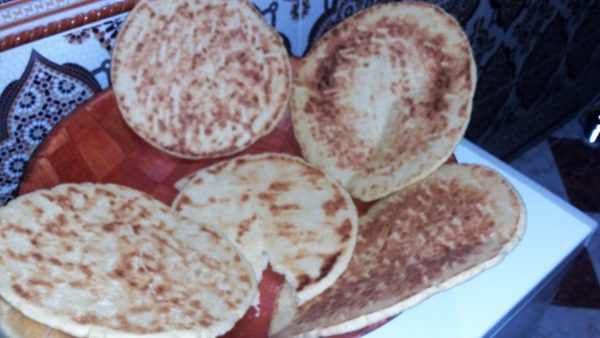 The heat in Algeria was something I didn’t enjoy. If you didn’t know, Algeria is situated in Africa which generally reaches higher temperatures than Europe, and is a lot more humid. I love the sun, but the first time I visited was in October and it was still over 30 degrees Celsius (about 90 Fahrenheit) and really sticky. It was uncomfortable and made me feel quite ill.

One thing I absolutely love about Algeria is the people. They’re so warm and welcoming, and the hospitality is top-notch. My husband’s family accepted me as one of them the second I walked through the door – it was like I’d always been there. On a few occasions we’ve been to parties and weddings where I meet his extended family and everyone wanted to talk to me. They see me as interesting and exotic, which I find pretty amusing! 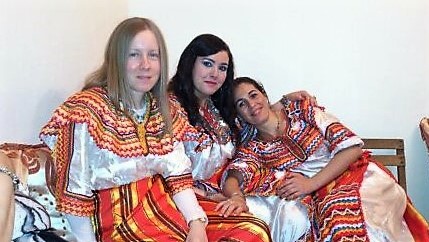 The food is wonderful too. If you’ve ever tried Moroccan cuisine, you’ve pretty much tasted Algerian. North African food tends to consist of couscous (LOTS of couscous), bread, meat (especially lamb), vegetables and herbs/spices such as coriander and cinnamon. Tagines (traditional stews) and soups are very common. I’ve never been given an Algerian dish I disliked.

Once I visited during Eid al Adha, the Festival of the Sacrifice. It’s traditional to slaughter an animal such as a sheep or a goat for this celebration and a lot of families like to do it themselves. So, from about a week before Eid until the actual day, there are sheep everywhere: roaming the streets, playing outside with the kids, even in people’s houses! Sometimes you can’t sleep because of all the bleating and ‘baa-ing’ through the night. It was definitely one of the stranger things about my stay. 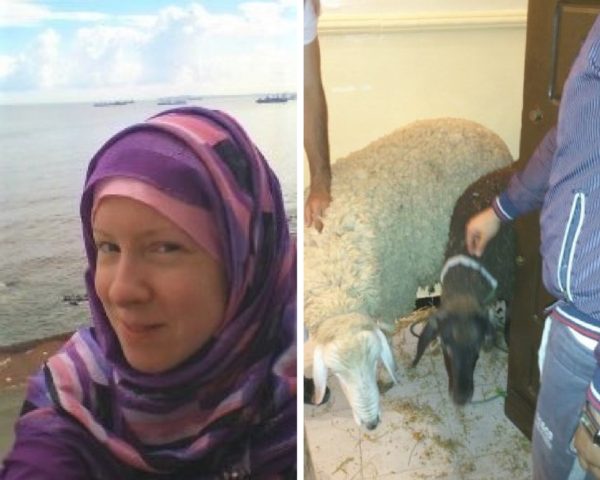 Although it’s not a very touristy place, there are still some gorgeous sights to see in Algeria. The north has plenty of Roman ruins and one of my favourite days out was to Tipaza 40 miles west of Algiers where we visited the remains of a Roman city (known back then as Tipaza); amphitheatre and everything. There are also some parts of the country with breathtaking scenery, such as Béjaïa 100 miles or so east of Algiers, and of course the Sahara Desert which covers over four fifths of the country. 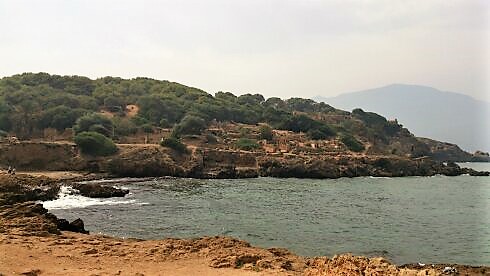 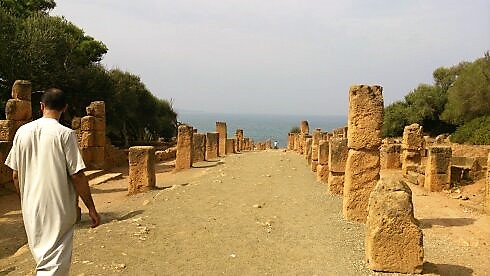 My experience of Algeria has mainly been positive. I definitely need to learn a little more of the language though, and whenever I visit now I always stick to winter so the heat isn’t too fierce. It’s not somewhere I would want to live but I’ve found it to be a very nice place to visit.

1. Don’t drink the water! Unless you’re Algerian and used to it, you will most likely get a stomach upset. Bottled water is safe to drink, but don’t add ice to your drinks as this has probably been made with tap water.

2. It’s recommended to get yourself immunised against certain diseases before you go. I had vaccinations for typhoid and hepatitis.

3. You’ll need to apply for a visa. Being married to an Algerian, I was granted a family visa; however if you’re just going for a holiday you’ll need to obtain a tourist visa. If you’re in the UK, you’ll have to travel to the Algerian Consulate in London for this.

4. Learn some basic phrases in Arabic (or at least French) before you go. Not many people there can speak English so it’ll benefit you to be able to ask where the nearest toilet is!

5. Being an Islamic country, women are expected to dress modestly, covering their entire bodies and preferably their heads too. If you visit as a tourist you wouldn’t generally be expected to wear a headscarf (unless you go into a mosque) but should wear something modest and loose-fitting. It would be very disrespectful to wear skimpy clothes and would probably illicit a few comments and judgy looks from the locals.

6. The national currency is the dinar. This can only be exchanged inside Algeria and should not be taken out of the country. Banks are the best places to exchange your money; however there is also a famous and thriving black market for currency (I’m not condoning this as obviously it’s not legal, but they do offer better rates than the banks). Be very careful if you decide to go down this route!

7. If you visit during Ramadan, everyone will be fasting and most of the shops, restaurants and attractions will be closed during the day. Life slows way down and most people will be at home or worshipping in the mosques. It might be better to go at a different time of year when there’ll be more to do.

8. Police roadblocks are frequent, mainly on motorways. Always slow down or stop when asked and follow their instructions carefully. The Algerian police are not the most friendly people in the world (and they carry rifles) so you don’t really want to mess with them. Always carry some ID such as your passport as you must produce it upon request. It’s also against the law to photograph police and military personnel/buildings.

9. If you’re not travelling with any Algerians, an organised tour is probably the safest way to explore the country. Stay with the group and don’t go off alone. Also avoid travelling between cities at night as this is the most dangerous time. Just go to sleep and travel to your next destination in the morning.

10. Enjoy it! Algeria will probably be different from anything you’ve seen before and for most people will be a once-in-a-lifetime experience. Make the most of your time there and see as much as you can.

Thank you so much Nicola for giving us all an insight into Algeria! I just love hearing from people who have visited countries not many of us have been to.

You can find Nicola blogging at her London-based health, fitness and lifestyle blog –  https://www.nicshealthylife.co.uk

You’ll also find my post I did for Nicola over on her blog too! It was something a bit different: a berry, banana & oat smoothie!