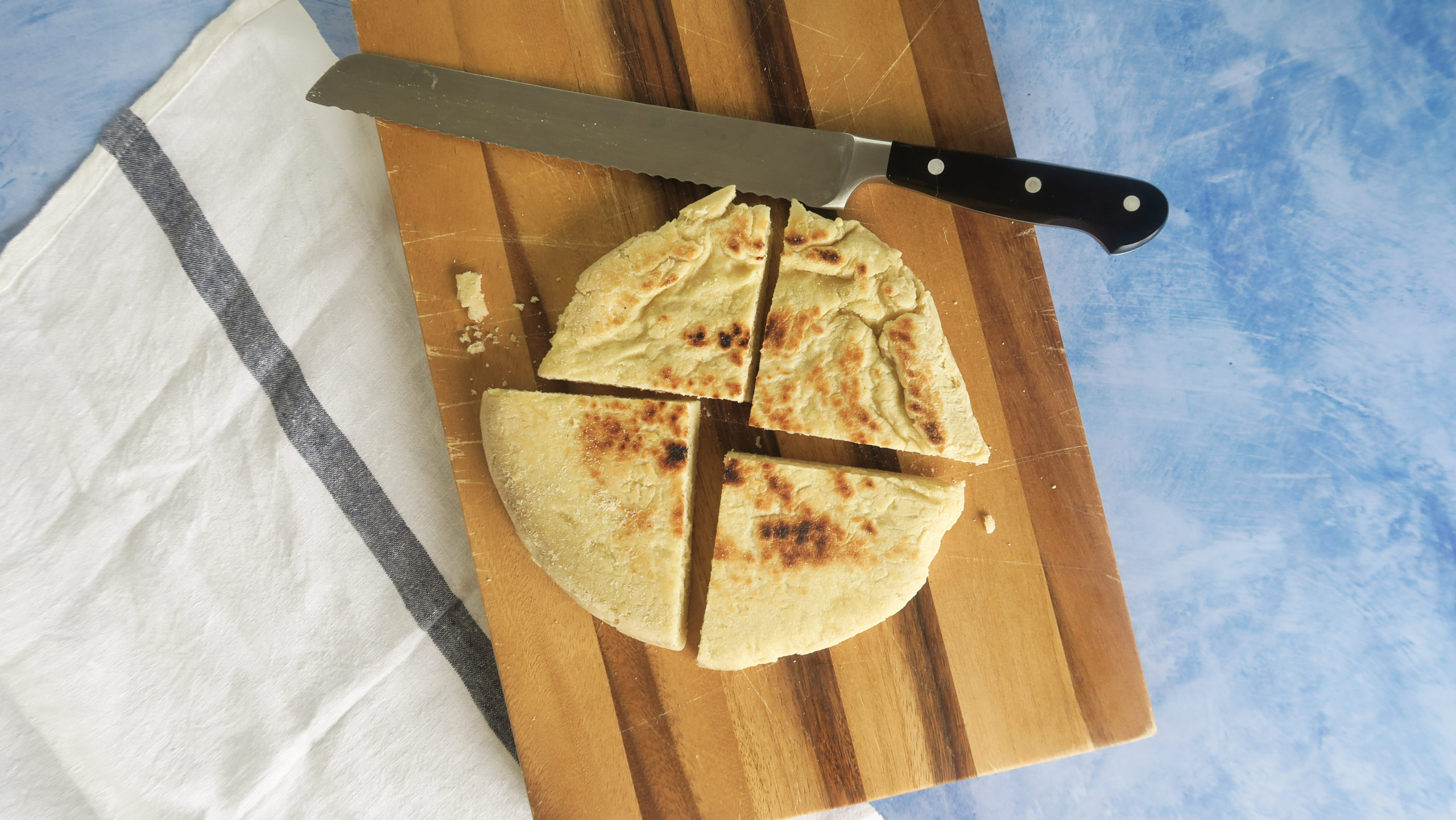 This super crispy semolina-based bread which originates from Algeria, is just SO GOOD! Almost a flatbread, this round bread is perfect served up with casseroles and stews or as I like to have it, with Nutella! Algerian Semolina Bread makes a good alternative to flatbread.

Why should I make kesra bread?

I have changed up this recipe quite a bit. Firstly, it would traditionally be cooked in the whole way in cast iron pan and have a circular pattern embossed on the top from doing so. I decided to finish mine off in the oven for extra crispiness.

Traditional Algerian semolina bread would only contain semolina, oil, salt and water. Upon my research, I discovered many people adding yeast and also bread flour too. I’ve gone with this approach as I was afraid I’d end up with a really flat bread which is not what it’s meant to be like.

THE CRUST IS THE MAIN EVENT!

The best thing about this bread is the crust! It’s super crispy and flavoursome due to it being cooked first in a pan with oil and then finished off in the oven (not the traditional way – that would be ONLY in a pan).

It’s perfect for being dipped into stews and casseroles! We also toasted our leftovers and ate it with butter, which was still as good! Nutella is also a good option…just saying!

Fine semolina – It can be hard to find ‘fine’ semolina in the supermarket but Amazon do stock it.

Quick dried yeast – I’ve linked a tub of 500g of yeast to save buying those individual sachets because you only need 4g in this recipe.

WHAT EQUIPMENT WILL I NEED?

A d-scraper – perfect for mixing the ingredients into a dough.

A tea towel for covering the bread when it’s proving

Cast-iron frying pan – a medium-sized one is sufficient. I’ve linked one but I’d recommend a set of 3 as cast-iron pans are so handy to have. You could use a mini one for making a skillet cookie!

Can I make semolina bread with normal semolina?

Can I make semolina bread without strong bread flour?

Yes! The traditional Algerian bread was made with semolina flour, water, salt and oil. The outcome will be different but I’m sure it will be just as nice. If doing so, I would use 500g of semolina to make up for the lack of bread flour.

Can I use fresh yeast instead of dried?

I don’t see why not. I would suggest mixing the yeast with the water in the recipe and pour it in the well, along with the oil. See the recipe below to see what I’m talking about.

I don’t have any sugar, can I leave it out?

Of course. The sugar may add a tiny sweetness but it’s not necessary. I’m sure you can also use granulated and other sugars if you don’t have caster.

I don’t have any olive oil, can I use a different one?

Yes, feel free to use a different oil if you don’t have any olive.

This Algerian bread lends itself well for stews, chillis and casseroles. See below for some of my favourites:

The most commonly eaten bread in Algeria - perfect served with casseroles or stews, or simply with butter.

See my How to Eat like an Algerian post for more in-depth information on how you would eat in Algeria.

Thought about visiting Algeria? I recommend reading An English Girl in Algeria: Experience and Tips.