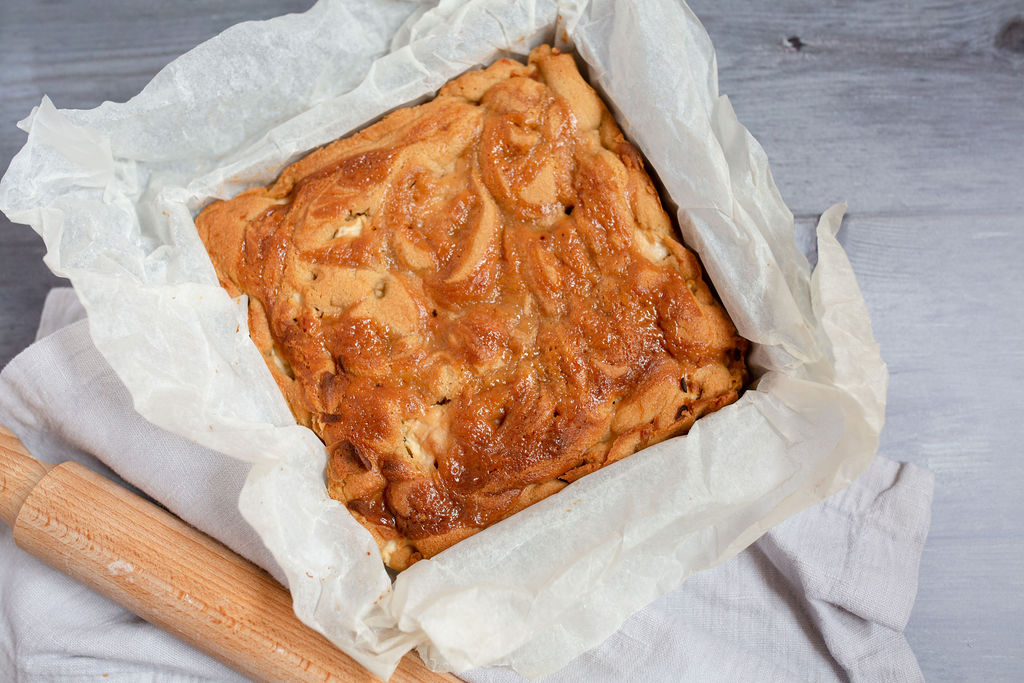 Quick and easy toffee sauce swirled into apple chunks in a golden, moist sponge. These toffee apple blondies are great for serving on Bonfire Night (or all year round!)

These toffee apple blondies all started because I wanted to try and bring out those flavours that surround Autumn. The iconic toffee apple, melted toffee sauce on a pudding; apple crumble.. I wanted to gather these all up and eat them in form of a cake!

I love brownies but I thought brownie’s sister, blondie, might have to step to the challenge. It took a couple of tries but I finally got the results I was after: a moist sponge with soft apples pieces enveloped in toffee sauce. Autumn in cake form.

The sauce used in this recipe is also one of the simplest I’ve ever made, and I think I’ll be making it again and again. It’s a cheat’s toffee sauce: melting hard toffee candies down in a pan and adding double cream to thicken. The most glorious results come from doing this. You’ll see!

Why should I make Toffee Apple Blondies?

What ingredients do I need to make Toffee Apple Blondies?

Unsalted butter – essential for creating the lovely, moist sponge. Feel free to use salted if that’s all you have.

Hard toffees – any small, hard toffee will do. I used these Waitrose Dairy Toffee’s.

Double cream – helps to thicken up and create the toffee sauce. You can also use heavy cream. Single cream will create a much thinner sauce.

Dark brown soft sugar – I went for a dark brown sugar as I wanted the sponge to have a almost treacle-like taste, unlike caster which would give a much lighter flavour.

Eggs – help to give the cake structure and to bind the ingredients together.

Vanilla extract – you can use vanilla pod seeds, vanilla bean powder.. anything vanilla.

Plain flour – to help give the sponge structure.

Baking powder – to help give it that rise.

Apples – any variety will do!

Are Toffee Apple Blondies suitable for vegans and vegetarians?

Toffee apple blondies are suitable for vegetarians but this recipe isn’t suitable for vegans. To adapt to become a vegan recipe, you could use a vegan spread in place of the butter. The same for the cream. You could also make your own caramel sauce instead by melting sugar in a pan, adding a splash of vegan cream to create a sauce. An egg replacer would need to be used too. I’d start with finding a vegan blondie recipe and then adapt it by adding in the apples and sauce.

Do I have to use a hard toffee?

No, you can use a soft toffee but just know that they will take less time to melt (a bonus!)

Can I use eating apples or do they have to be ones for cooking?

Once you’ve finished making your toffee sauce, put a lid on pan to keep it all melty and ready for swirling.

Melted toffees, apple pieces in a golden sponge. Slice up and serve with coffee.