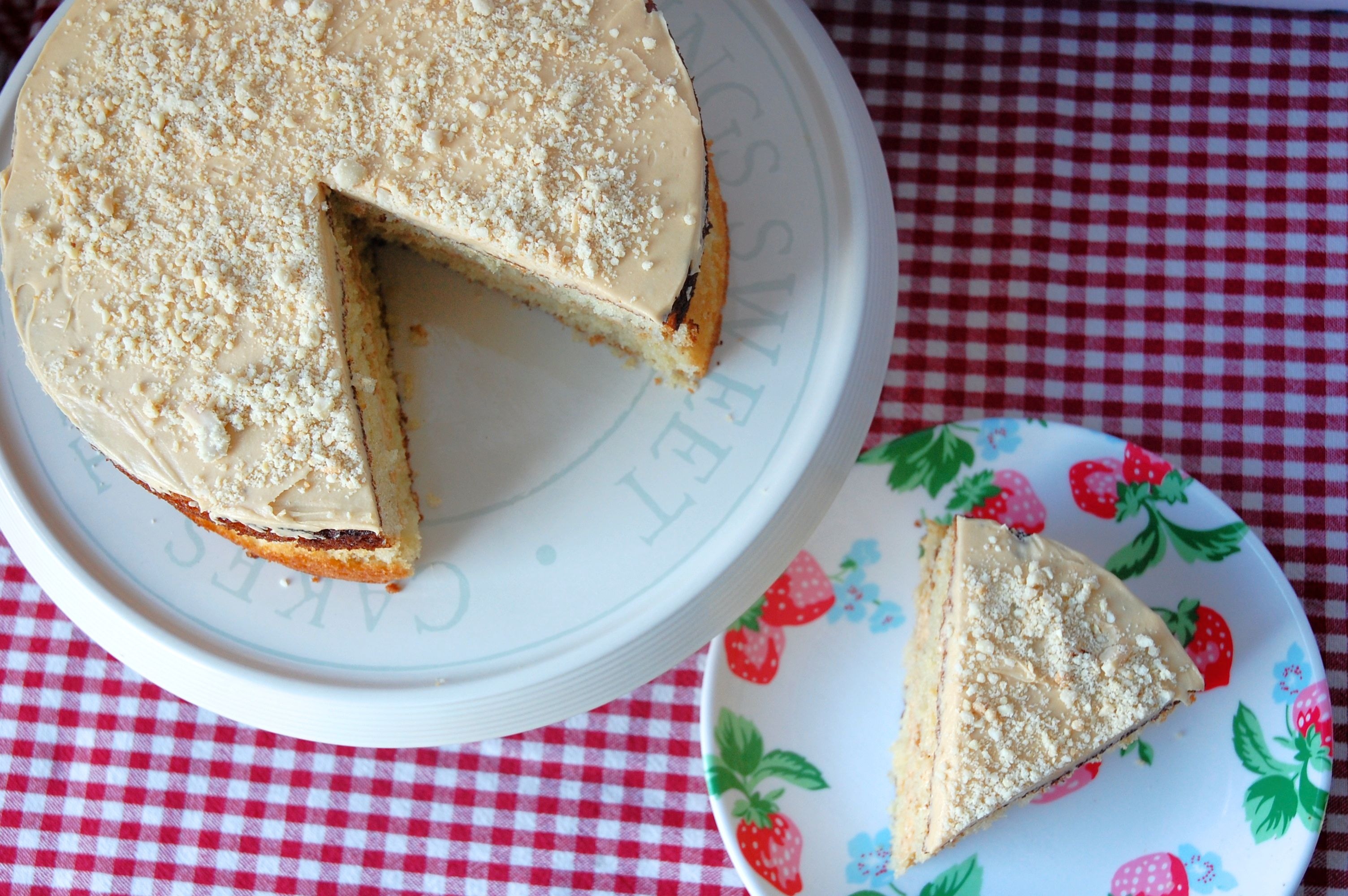 Also known as Bolo de Ginguba, this sponge cake filled with crushed peanuts and topped with caramel buttercream, is a traditional cake in Angola. It’s certainly something different to serve for afternoon tea!

I’m so happy with how this cake turned out in the end, as baking it was not the easiest task! One BIG reason for this was my oven breaking during the bake. I’m still not entirely sure of the cause but here’s what happened…

The electric went off when I was mixing and as the oven was pre-heating, it turned off. I turned the electric back on and as expected the oven continued pre-heating. I put the cake in the oven and baked it for the normal time of 25 minutes.

Now, our oven is usually TOO hot, so I was keeping a close eye on it. When the time was up, I noticed the batter was still raw. I had a feeling something was up during the halfway point as it would usually be browning by then. It turns out that the oven wasn’t even that hot and I expect it’s what caused the electric to blow. Anyways, cut a long story short, I ended up using our top oven which was still working, but as I wasn’t too familiar with baking cakes in it, the sponge did burn slightly as you’ll notice in the pictures. I was happy with the end result though, and I haven’t got the time to make it again, so please excuse that!

It was pretty hard to find an Angolan dessert as fresh fruit is the most common thing to eat after meals, but I came across this Peanut Sponge Cake and thought I could definitely adapt it! As you’ll know from my previous post, a lot of the food from Angola has been heavily influenced by Portuguese cuisine, and peanuts feature a lot in most Angolan recipes (also see previous post!)

I did change the recipe quite a lot. The sponge was meant to be made with peanut butter and also yeast, which I thought was a bit strange. I decided to make a classic Victoria Sponge recipe and instead of coating it with condensed milk, which the original called for, I opted for a caramel buttercream and crushed peanuts to give a similar look to the original. The end result wasn’t over-powering and the caramel paired really nicely with the peanuts, which also gave some added texture!

*this is an affiliate link meaning I’ll make a small profit if you buy from it.

An Angolan-inspired cake full of crushed peanuts and topped with caramel buttercream. Perfect with served with coffee.