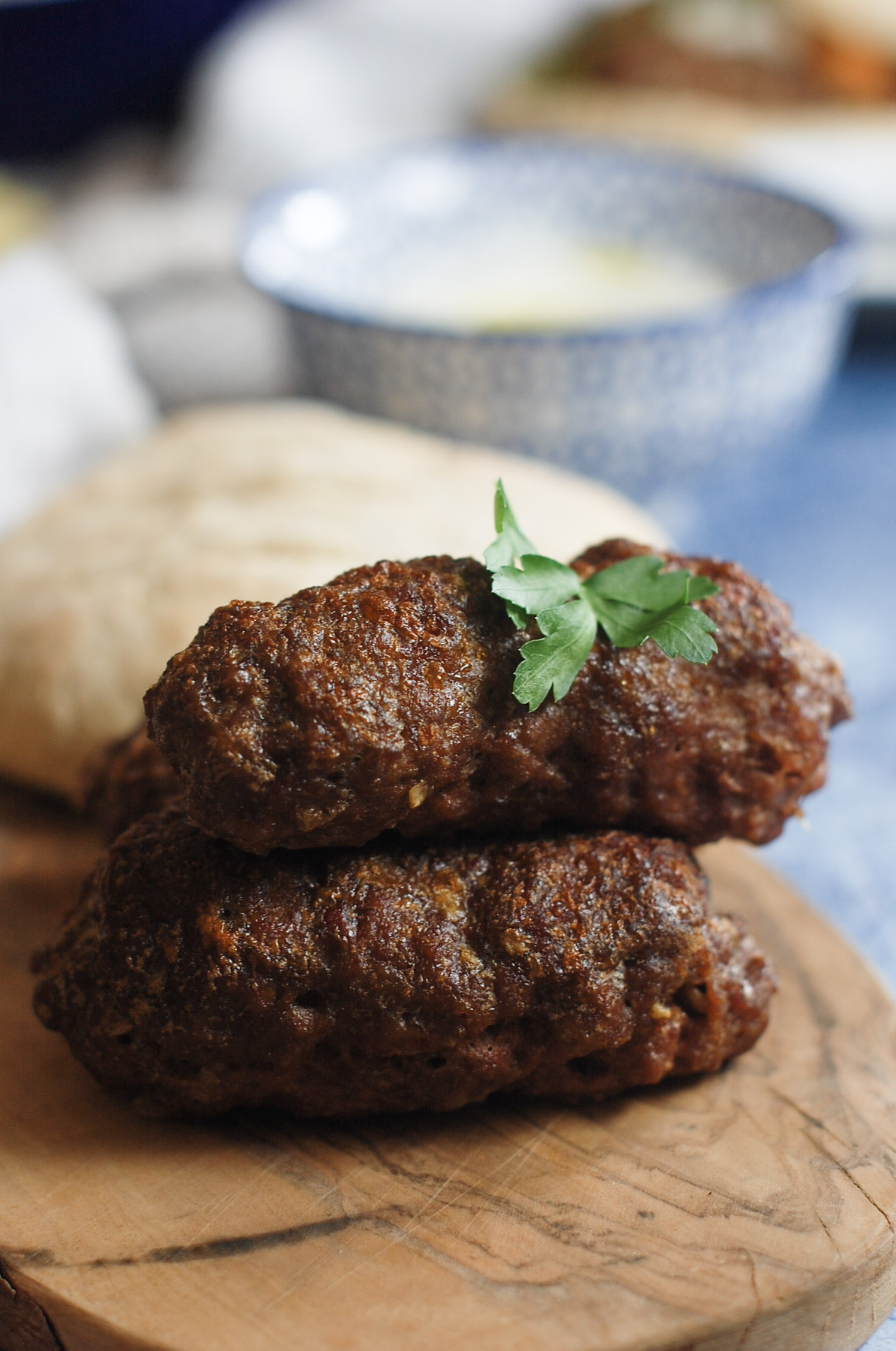 Grilled sausages traditional of the Balkans, full of flavour and simple to make! Cevapi sausages will be ready in under 15 minutes!

Never did I think I would be adding sparkling water to a grilled sausage mix but apparently, according to Jamie Oliver’s recipe, it’s needed. And I’m sure it does as these sausages taste fantastic. It’s got something different about them in the texture.. more air… a lightness? It’s got to the bubble in sparkling water paired with the bicarb!

Cevapi are grilled sausages traditionally made in the Balkans, particularly Bosnia and Herzegovina. They are usually served in some lepinja bread and topped with ajvar sauce (made from peppers and aubergines). It’s like the kebab of the Balkans, and boy it’s good.

They are traditionally grilled on a BBQ but I cooked mine in the oven. Some countries like Croatia, Serbia and Bulgaria, will mix their meats in the sausage. This recipe only contains beef, like in Bosnia.

Cevapi (also known as cevapcici) sort of remind me of these lamb shish kebabs from Armenia, one of the earlier countries I cooked from in this a-z journey. I expect this is due to the Turkish influence on them as they are often compared to shish and kofta/qofte.

READ: My guide on Bosnian Food, Background and Culture – ALL you need to know!

Why should I make cevapi sausages?

Where do cevapi sausages come from?

Cevapi sausages have strong links to the days of the Ottoman Empire. It’s why you’ll notice similarities between cevapi and other kebabs like the kofta and shish kebab. Both very common foods in Turkey.

In Ottoman times, the outlaws would make these long meatballs out of any pieces of meat they had and cook them on the fire. It was know as Leskovac Cevap. This idea very quickly spread to become a favourite in the City of Belgrade in Serbia, in 1860. The locals discovered they were a great thing to eat after a night drinking.

In 1928 (approx) cevapi became a popular thing to eat for breakfast with people ordering them from the local takeaway shops. Cevapi soon spread across the Balkans and is now very common not only in Bosnia and Serbia (it’s the National dish!) but also Croatia, Macedonia, Albania, Moldova, Bulgaria, Montenegro and Kosovo, as well as none Balkan countries like Italy and Austria!

Cevapi sausages are made for serving like they would in Bosnia and Herzegovina. Bake a batch of lepinja bread rolls, add in the sausages and top with the avjar sauce. A little bit of sour cream and a guandilla chilli will top it all off nicely! 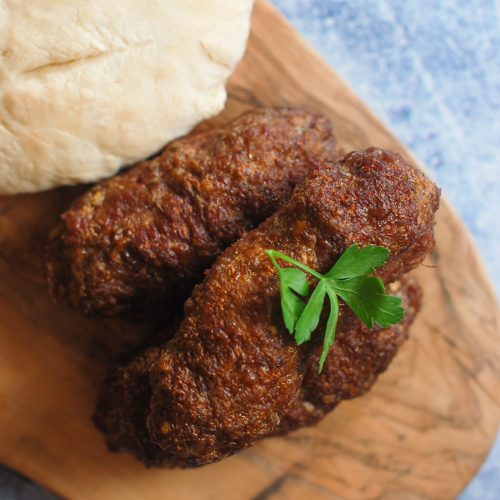 Cevapi (Grill Sausages from the Balkans)

Grilling – I actually cooked our cevapi in a hot Aga roasting oven however if you wish to grill these, I would recommend putting them up high, as close to the heat as possible. You may need to turn them to ensure even cooking, as well as maybe adding on an extra 5 minutes to the cook time. Storage – You can store these for a day or two in the fridge, in a well sealed contained. They’ll be nice eaten cold or you can re-heat (see below). Re-heating – Cevapi can be reheated either in a hot oven for about 15-20 minutes, in a microwave for about 5 minutes or you can fry them in some oil. Please make sure you reheat thoroughly until piping hot.  Freezing – These grilled sausages can be frozen pre-cook or post-cook. Not matter if you are freezing the raw or cooked sausages, you may want to freeze them on a tray first (lay them all out separately on a tray and place delicately in the freezer so they are all upright) and then once frozen, put them all in a freezer bag. Doing this will ensure they don’t stick together when freezing.  The raw frozen sausages will keep for 1-2 months. The cooked frozen sausages will keep for 2-3 month before the quality is compromised. Defrost thoroughly before re-heating (see above).