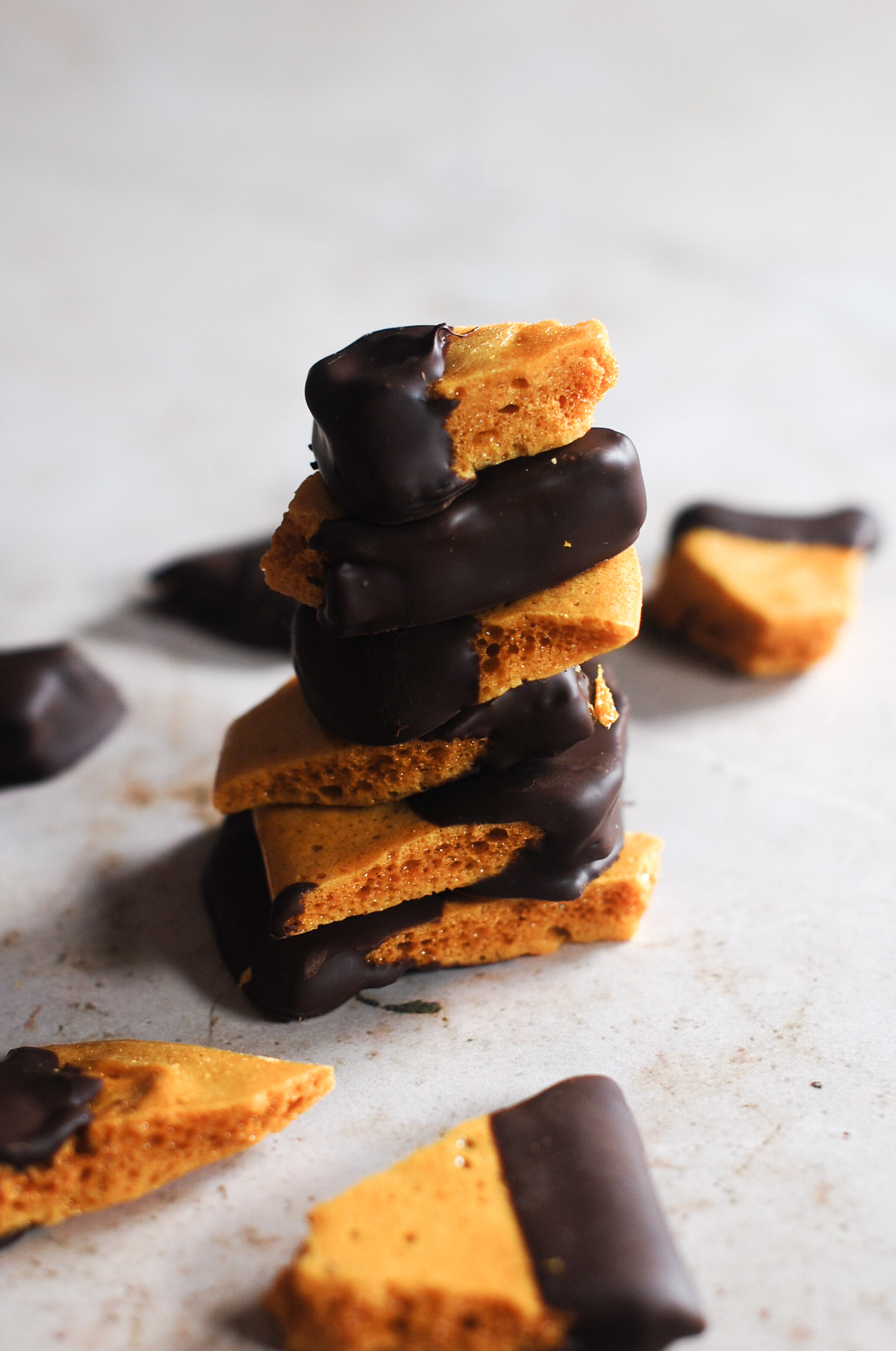 Chocolate dipped honeycomb candy – A.K.A hokey pokey in New Zealand, is so simple to make. Perfectly crunchy and very addictive.

I’m SO glad I decided to make delve more into Oceanian recipes and bring back this retro classic – Hokey Pokey! You’re probably thinking, wasn’t that also a song? Well yes, in fact it is! But here in the UK we called it the ‘Hokey Cokey’ instead! “Knees bent, arms stretched, ra, ra, ra!’

I digress. So, hokey pokey, which is essentially honeycomb, in which I’ve decided to dip mine in dark chocolate. I went for dark chocolate as I wanted to balance out some of the sweetness from the honeycomb. Trust me, it’s sweet but OH SO good.

This honeycomb toffee is really simple to make. It’s made from four ingredients: granulated sugar, golden syrup, water and bicarbonate of soda. There are many variations though. Some choose to use brown sugar and even vinegar is sometimes added. This is my version. I hope you like it!

Why should I make hokey pokey?

The science of honeycomb candy

In a nutshell, the sugar caramelises, the bicarbonate of soda breaks down and releases carbon dioxide which then creates those air bubbles we all love and look for in our honeycomb. But how? Let’s see…

Why is golden syrup so desperately needed?

Water is very useful if you want your candy to set really hard, like honeycomb should. Water helps with burning when the water in the sugar heats and evaporates. A low concentration of water is needed for a hard candy.

The main chemical reaction happens when the big guns gets added: bicarbonate of soda, a.k.a NaHCO3. The bicarb breaks down and releases the gas, carbon dioxide, which then gets trapped in the sugar, creating air bubbles.

Why is my honeycomb chewy?

So this happened to me on my first and second test of this honeycomb! It’s an easy mistake to make and is easily corrected. Honeycomb doesn’t set properly if the sugar hasn’t been heated to the correct temperature of at least 140° C. You really must use a sugar thermometer. This was my mistake the second time round!

For thicker pieces of honeycomb, use a smaller pan! Double the mixture and make a few batches to give away as gifts! 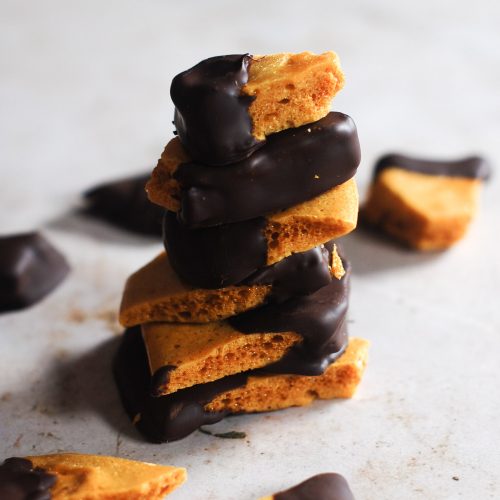 Storage – it’s best to store honeycomb in a sealed container but not in the fridge. They may stick together so try and keep as separate as possible. Ensure they are out of the heat or else they will go sticky. They should last about a month.

Honeycomb (hokey pokey) can be used in so many ways! Here are a few suggestions:

All perfect to make as homemade gifts!